Mechanicsville, Virginia, November 21, 2019 – The Society of Collision Repair Specialists (SCRS) commends Senator. Kennedy (R-LA) and Senator Blumenthal (D-CT) for their joint letter to the Department of Justice (DOJ) which urges the Department to preserve a consent decree intended to protect consumers which was reached in the case of U.S. v. Association of Casualty and Surety Companies, et al. Both Senators serve on the important Senate Judiciary Committee which has oversight over the DOJ. The letter dated November 19, asserts that “eliminating this agreement would turn back the clock on automotive consumer protections,” and that “sincere and thoughtful concerns raised by constituents” have led to a conclusion that “the merits and relevance of this decree warrant its continuation.” 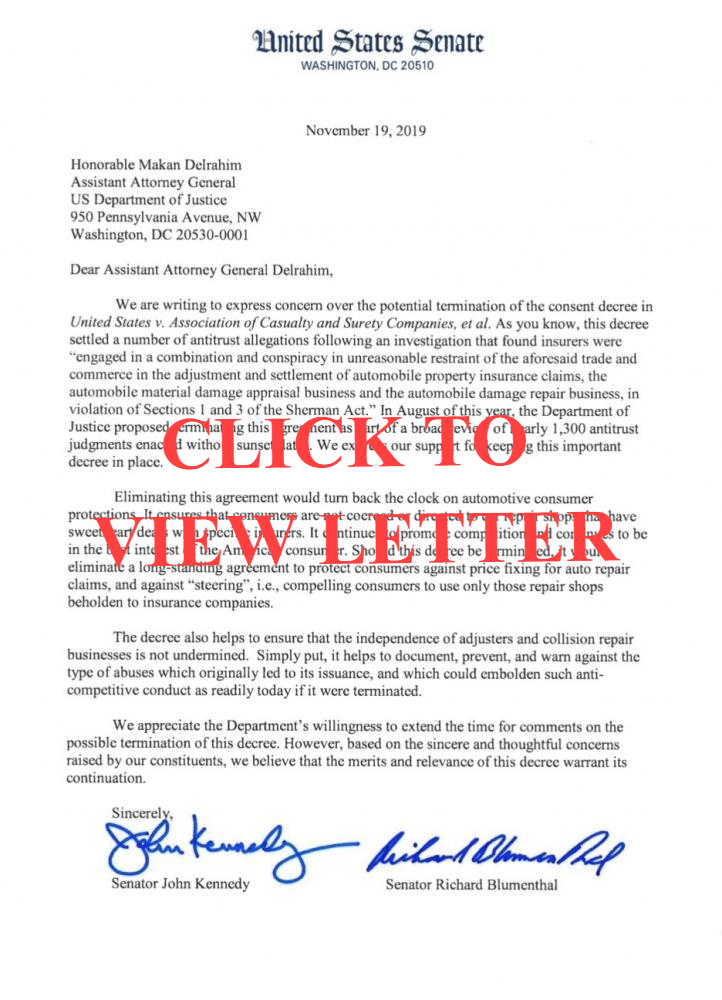 In April 2019, the DOJ announced plans to review nearly 1,300 antitrust judgments enacted without end dates, and in August, the 1963 Consent Decree was identified as one of the actions proposed for termination as part of a much larger de-regulatory initiative by the current administration.

The Consent Decree has served as a significant document for consumers which highlight an agreement between the insurance industry and the US government to forever refrain from practices that were established as anti-competitive means of steering, price fixing and depressing and controlling automobile material damage repair costs.

The DOJ held an open comment period, which was extended specifically for comments on this Decree to October 2, 2019, becoming one of the two most-commented-on Decrees of the 1300 proposed for termination.

Since the close of the comment period, SCRS has been working on behalf of members, affiliates and the industry at large (and in tandem with consumer representatives) to garner additional support from Members of the House and Senate Judiciary Committees. The association has arranged multiple meetings in D.C. with subject matter experts on the Consent Decree, with key offices on Capitol Hill. That work continues and has recently resulted in the significant bi-partisan letter to DOJ from Senators Kennedy and Blumenthal.

“This is an excellent example of policy makers who listen intently to the concerns of their constituents and who provide outstanding leadership on their behalf,” said SCRS Chairman Brett Bailey. “We are enormously grateful to Senator Kennedy and Senator Blumenthal for this letter. This is an issue of great importance not only to collision repairers across the nation, but to every American consumer. These Senators have demonstrated that party lines don’t have to get in the way of being champions for maintaining consumer protections. They understand that this Decree is still valuable, applicable and necessary in the market today. SCRS will continue to advocate to other Members of Congress and to urge them to communicate with DOJ and to express their commitment to preserving the Decree on behalf of consumers and small businesses in their states and districts.”

On August 20th, during the open comment period, SCRS did submit an official opposition to the proposed termination of judgment to the Department of Justice.

###
About SCRS: Through its direct members and 39 affiliate associations, SCRS is comprised of 6,000 collision repair businesses and 58,500 specialized professionals who work with consumers and insurance companies to repair collision-damaged vehicles. Additional information about SCRS including other news releases is available at the SCRS Web site: www.scrs.com. You can e-mail SCRS at the following address: info@scrs.com.

Page load link
X
We use cookies to ensure that we give you the best experience on our website. If you continue to use this site we will assume that you are happy with it.OkPrivacy policy
Go to Top